Why is Modern Portfolio Theory a Myth?

“…different kinds of price series exhibit different degrees of memory. Some exhibit strong memory. Others have weak memory. Why this should be is not certain; but one can speculate. What a company does today-a merger, a spin-off, a critical product launch-shapes what the company will look like a decade hence; in the same way, its stock-price movements today will influence movements tomorrow. Others suggest that the market may take a long time to absorb and fully price information. When confronted by bad news, some quick-triggered investors react immediately while others, with different financial goals and longer time-horizons, may not react for another month or year. Whatever the explanation, we can confirm the phenomenon exists-and it contradicts the random-walk model.

Second, contrary to orthodoxy, price changes are very far from following the bell curve. If they did, you should be able to run any market’s price records through a computer, analyze the changes, and watch them fall into the approximate “normality” assumed by Bachelier’s random walk. They should cluster about the mean, or average, of no change. In fact, the bell curve fits reality very poorly. From 1916 to 2003, the daily index movements of the Dow Jones Industrial Average do not spread out on graph paper like a simple bell curve. The far edges flare too high: too many big changes. Theory suggests that over that time, there should be fifty-eight days when the Dow moved more than 3.4 percent; in fact, there were 1,001. Theory predicts six days of index swings beyond 4.5 percent; in fact, there were 366. And index swings of more than 7 percent should come once every 300,000 years; in fact, the twentieth century saw forty–eight such days. Truly, a calamitous era that insists on flaunting all predictions. Or, perhaps, our assumptions are wrong.”[i] (Emphasis added)

The industry operates to maintain the status quo by promoting “diversification” and asset allocation through periodic rebalancing. The underlying assumptions are seldom detailed to either advisors or their clients. The acceptance of efficient markets and earlier work published by Harry Markowitz have become the foundation for the majority of firms and portfolio models.

Primary justification is often based on the Efficient Frontier as in this illustration: 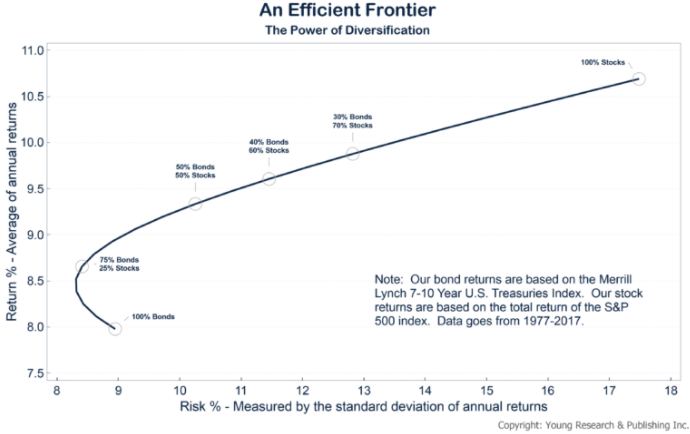 Advisors and clients find comfort in a balanced portfolio that appears to generate an average return around 9.5%. “I can live with that.”  Reality, however is much different when we examine the seldom presented decade data.

In the academic world, when increasing a portfolio’s volatility (as proxy for risk tolerance), the result is higher return. Decade data reveals the assumption is false. Therefore, the advice typically delivered to clients is, at least, misguided.

Clients do not accumulate or retire within the data illustration in the first chart. They live and retire with the unpredictable, developing frontier as illustrated in the above chart.

The Efficient Frontier has no accommodation for investor response to major market declines except relying on advisor hand holding efforts.

“The bear market of 1973-1974 wiped out 43 percent off stock value, and the end of the gold standard for the dollar durned the sleep currency market into the world’s biggest casino.”[i]

The bell curve is and standard deviation is an easy way to measure market risk. That does not make it correct. So what? It is what your broker-dealer requires of you.

Dow theory has the longest data period to consider. Examination reveals that market prices do not fit well on a standard bell curve without significant tail exposure.

“…perhaps our assumptions are wrong.”[ii]